History and lineage of Aikido as pertaining to Iwama Takemusu Aikido 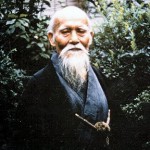 Aikido Lineage:
Morihei Ueshiba, referred to as O-Sensei (great teacher) or The Founder by Aikido practitioners, was born on December 14, 1883 in Tanabe in present-day Wakayama prefecture. At the age of seventeen he had his first formal training in Tenjin Shinyo-ryu jujutsu.
See more>> 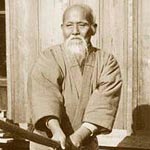 The other main influence on Morihei Ueshiba O-Sensei, not in terms of martial technique but rather in the spiritual sense, was Onisaburo Deguchi, the spiritual leader of the Omoto (Shinto) religion. O-Sensei met Deguchi for the first time in 1919.
See more>> 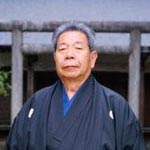 Morihiro Saito Sensei was born on March 31, 1928 in a small village near the Iwama dojo. He began his Aikido training when he was eighteen years old. He had practiced Kendo as well as Shito-ryu Karate and Judo. Saito Sensei was accepted by Ueshiba O-Sensei as a student, and this was the beginning of a very long and close relationship.
See more>> 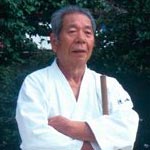 After The Founder’s passing on April 26, 1969, Saito Sensei became chief instructor of the Iwama Dojo as well as guardian of the Aiki Shrine close to the dojo.
Saito Sensei made his first trip abroad in 1974 to teach seminars in California. His lucid teaching methods made him very popular among Aikido practitioners the world over.
See more>>